Keep in mind that you’ll get a higher serving yield of product from precooked so the difference might not be as much as it initially seems.

When it comes to pizza toppings, pepperoni is king. Yet, despite there being many options for pepperoni and it being a classic, it sometimes can be viewed as not very inventive. Today’s diners are looking for new adventures to tantalize their taste buds and pique interest in their Instagram snaps. For that, you might consider pork to top your pies.

The easy answer would be sausage, especially Italian sausage. It has good moisture content, plays well with other toppings (especially mushrooms and onions), and, like pepperoni, there are tons of options. From crumbles to slices, natural casings or not, hot or mild, there is plenty to choose from to help create the right flavor profile for your menu and price point.

Italian sausage can be a bit generic though. Most places have it, meaning it doesn’t necessarily stand out from the crowd. Making your own or choosing a purveyor that’s locally beloved can elevate it from the mundane, or you can select a sausage that’s out of the ordinary.

Chorizo is a good option—mainly flavored with paprika, it shares many of the same flavor profiles as pepperoni. There are both sweet and spicy chorizos so you can pick the right sausage to complement your pizza sauce.

Another choice could be andouille—a smoked sausage often popular in Cajun dishes. To complement the deep smoky flavor, try adding a little arugula salad to the pizza or a sweet onion jam. Andouille can also be the base for a great specialty option, try adding some crawfish tails or okra to the pie to play to its Cajun roots.

One trend you might see in many places these days is breakfast pizzas—meats and cheeses with a softly done egg in the center that oozes out when punctured. For that, consider a linguiça style sausage, a lovely smoke cured sausage that’s fragrant with paprika and garlic. 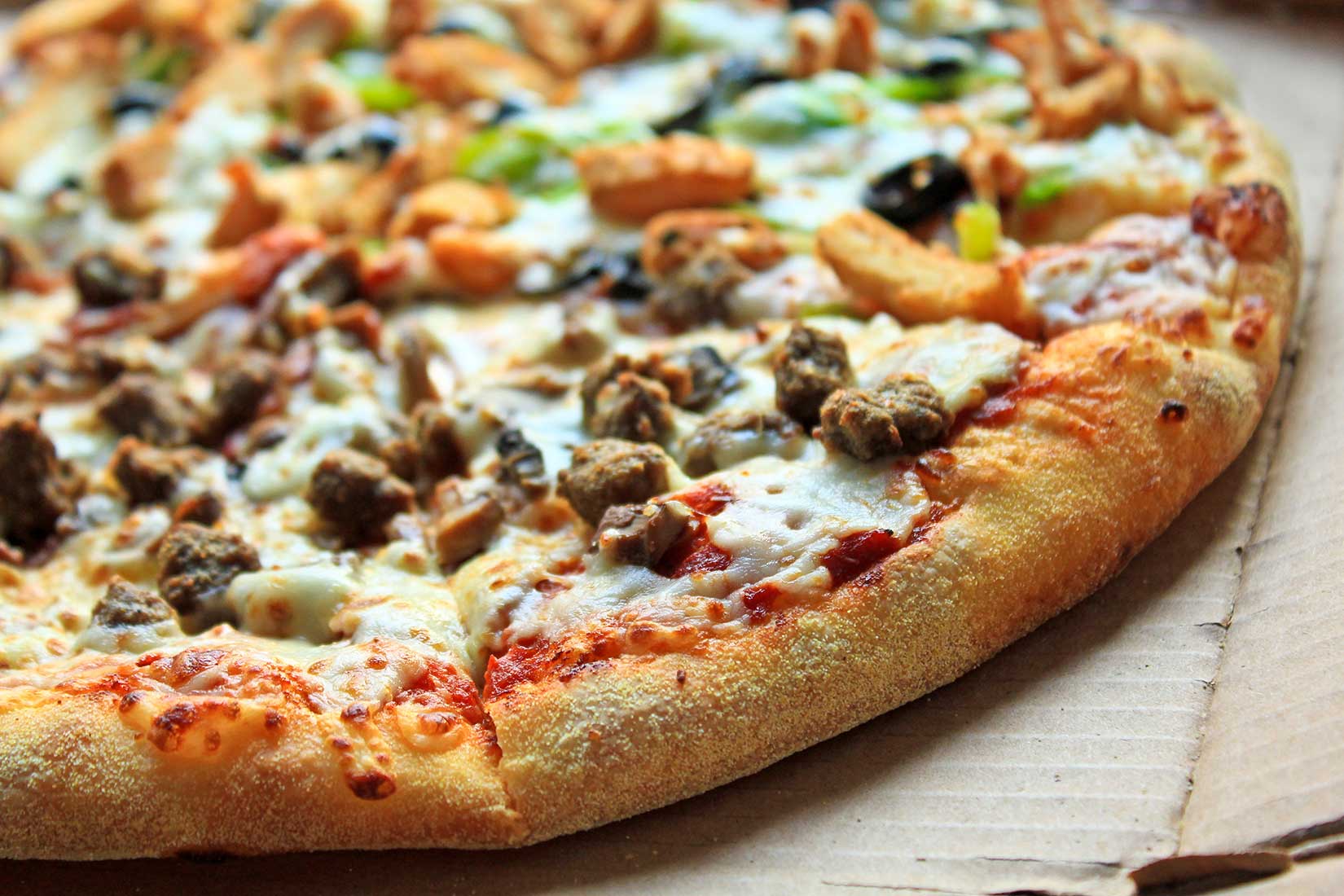 Beyond sausage you could leverage the increased buzz of BBQ to tailor for your pizza. For a less saucy BBQ, try a North Carolina style with pulled pork spread across the pizza then spritzed with vinegar. The tang of the vinegar should pair well with many tomato-based pizza sauces, although you may want to pick your cheese wisely. Try a cheddar-style cheese and add some finely diced peppers (like a habanero or jalapeño) to bring a little heat. If you’re feeling extra adventurous, now would be the time to roll out the Ghost Peppers or Carolina Reapers for a super-hot pizza that’ll get social media buzzing.

Pulled pork and hot peppers are also a fine jumping off point for a little cross-cultural fusion cooking. Instead of BBQ for your pulled pork cooking medium, switch to hoisin and soy sauce. The interplay of sweet and heat couldn’t be better.

Pork belly has gone from a trend to a menu staple. Crispy chunks and slices are the way to go to maximize flavor while not adding too much moisture to the pizza. Perhaps a bit more labor intensive then other pork preparations (usually requiring braising and then crisping) but whether it be smoky or salty, the look, taste, and mouthfeel can’t be beat.

Bacon doesn’t quite have the same impact on a menu as pork belly, but it does have many of the same qualities or taste and texture with a bit less labor needed in preparation—unless you’re making your own bacon in house. Bacon might also be the preferred pork to pair with the most controversial pizza topping: pineapple. Ham might be more common to pair, but between the sweetness and added moisture, bacon is the superior choice.

Ham on pizza can be problematic. Its low cost makes it popular but, as stated, it can be too sweet and often the water added to the ham can leach out during baking leading to a soggy crust. There are better options to try out.

Prosciutto, coppa, porchetta, pretty much any kind of pork charcuterie works well on a pizza by bringing just the right amount of concentrated flavor and moisture to your pie. Each has very distinct properties, so you can really play with other toppings to create a unique pizza. Put the salty prosciutto up against the sweetness of fig for the perfect fig and pig. Dial up the existing fennel in porchetta by adding some fresh sliced fennel bulbs for an intense flavor explosion on a white pizza. Or add pickled onion to your coppa pie for a little brightness.

A final consideration is what state to get your pork in. Apart from the cured meats, most of your pork products will require some cooking prior to adding to your pie. Increasingly you can get your sausage or pulled pork precooked and ready to serve in a wide variety of choices, preparations and flavor profiles that are easy to use and can help reduce cross contamination. If you have limited kitchen space or are trying to control labor costs this might be the right choice for you—even if it costs slightly more up front. Keep in mind that you’ll get a higher serving yield of product from precooked so the difference might not be as much as it initially seems.

Takin’ it to the Streets

The Value of Vegging Out

Fire Up the Fourth